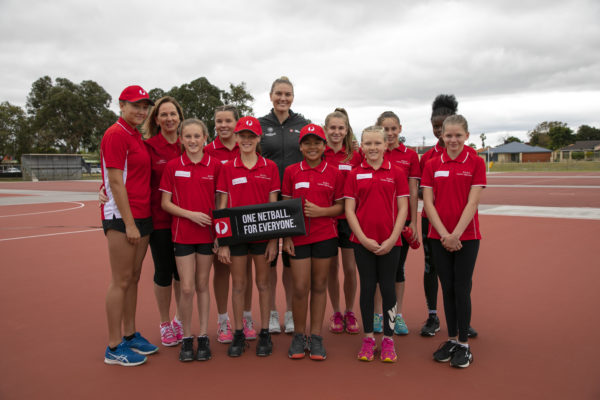 Southern Districts Netball Association has won a 2018 Australia Post One Netball Community Award and a visit from West Coast Fever defender Courtney Bruce for their ‘netball for all’ approach.

Based in Western Australia, the association was recognised for creating safe spaces, opportunities and access for everyone in their community to participate in netball. Programs such as No Limits Netball encourages players with a disability to engage with the sport and meet new friends in a team environment.

The club has also introduced competitions for boys and a mid-morning match-up for mums, which have been welcomed by the Langford and surrounding communities. With this continued support a Walking Netball program for ageing players is next on the club’s development agenda.

In addition, the association has contributed teams to the annual NAIDOC Netball Carnival during NAIDOC Week celebrations. Indigenous and Torres Strait Islander players from across Western Australia are invited to take part in the largest indigenous event in Australia.

Ms Bruce said the quality of nominations each year demonstrates the passion and commitment of many unsung individuals who work together to create environments where everyone feels welcome in netball.

“In my role as an Australia Post One Netball Ambassador I’m very fortunate to have the opportunity to spend time with incredible individuals and organisations, who work with such dedication to develop netball programs that everyone can participate in, regardless of their background or ability. It’s very inspiring.”

Australia Post General Manager of Marketing and Community, Andrea Pearman said: “As Netball Australia’s Community and Social Inclusion Partner it is a privilege to bring these Awards to fruition each year and recognise outstanding organisations, like Southern Districts, who are doing such amazing work to bring people together and create inclusive, healthier communities.”

“The stories that we see each year of the wonderful diversity and inclusion work being done right across Australia reinforces the importance of these Awards, and other programs like it, in highlighting the power of sport to help communities work better for everyone. Southern Districts’ commitment deserves to be celebrated and it serves as a great example for others to follow.”